skip to main | skip to sidebar

I’m sure most people were never expecting a trimaran would win (or even race in) an Americas’ Cup match, but yesterday the BMW Oracle Racing trimaran USA won the Americas’ Cup, defeating the catamaran Alinghi V by winning the first 2 races in a 3-race series.

USA crossed the start line 24 seconds ahead of Alinghi V and headed to the port side of the course, while Alinghi V headed to the starboard side. USA tacked to cover and took the initial lead. Alinghi was able to tack back to port ahead of USA after some good starboard pressure, but with a good covering tack USA got  out in front and stayed there.


USA, BMW-Oracle Racing's giant 90-foot trimaran has taken the first race in the 33rd Americas Cup by a margin of more than 15 minutes. After a pre-start tussle where Alinghi V picked up a penalty turn for not allowing enough room for USA while on port tack, the trimaran crossed the line more than a minute behind. She made up this deficit and was leading by more than 3 minutes at the weather mark of this upwind-downwind race. 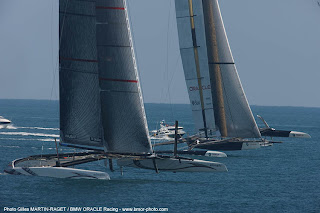 She held onto this lead in the downwind run, reaching speeds of up to 25 knots in the gentle breeze. The wing-sail clearly came into its own during this race, allowing James Spithill to sail USA consistently higher and keep the hull and windward float in the air. This allowed him to keep the apparent wind well forward as he played the puffs all through the race, steering the mega-trimaran like a dinghy sailor. 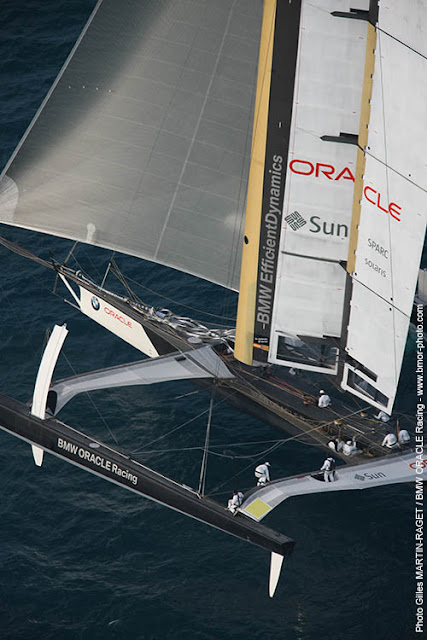 Check out the BMW Oracle Racing blog for more details.
Posted by Unknown at 11:55 PM 1 comment:

Groupama 3 out - heading for Capetown

Franck Cammas and the crew aboard Groupama 3 are heading for Capetown after sustaining damage near the join between the port float and the rear beam 2 days ago. This ends their second attempt on the Jules Verne trophy for the fastest boat around the world non-stop. They have reduced sail to slow the boat as well as making some running repairs. 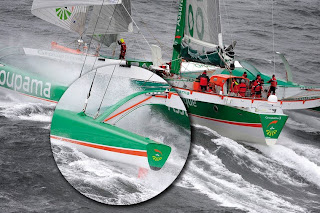 The damage occurred to a bulkhead inside the  rear part of the port float. Image © Groupama, used with permission.
Posted by Unknown at 4:24 AM 2 comments:

Yesterday the BMW Oracle Racing team took their BOR90 trimaran for a sail off San Diego in its "version 4.0" configuration - with the world's largest wing replacing the soft sails of earlier trials. 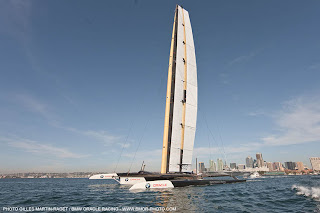 The "2-element" wing is raised from the port side with a massive gin-pole. The aft "element" of the wing is divided into 6 sections which appear to be controlled independently, allowing its "twist" to be tuned. 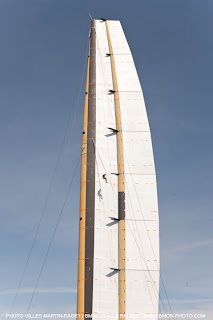 Getting the BOR 90 away from the dock after the wing was attached for the first time was a complicated process. The wing needed to be attached to the boat in near calm conditions, before helmsman James Spithill carefully maneuvered away from the dock with the wing down, in a horizontal position, assisted by numerous RIBs. Apparently, while the wing is attached the boat swing at a mooring - since it won't be possible to de-power the rig at the dock. 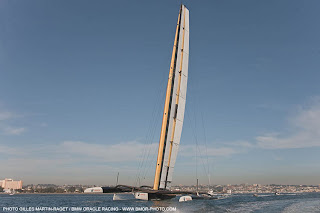 All photos © Gilles Martin-Raget / BMW Oracle Racing. Used with permission.
Posted by Unknown at 3:47 AM No comments: 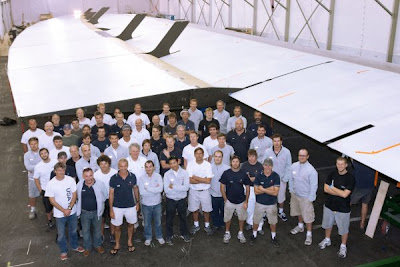 The BMW Oracle Racing team have revealed their "secret weapon", a 57m (190ft) wing for their BOR90 trimaran. There had been a good deal of speculation that BOR were building a wing for the boat when two large and long items arrived by truck from their boat builder in Anacortes, Washington several weeks ago.

BOR will test the performance and handling of the wing in comparison to the soft sail which the boat has been using on sea trials for the past several months.

Having the wing ready at this point was fortuitous timing for BOR, as they broke the mast for their soft sail last week.

A solid wing like this is more efficient than a soft sail in aerodynamic terms, and it is easier to control than a soft sail. This is the largest wing-sail ever constructed for a sailing boat. Its height is larger than the semi-span of a 747 (57m vs 31m). 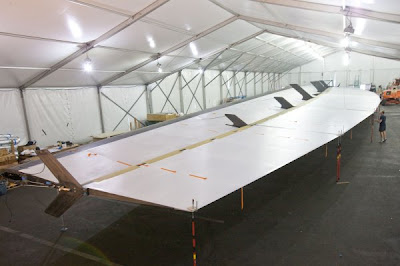 Photographs © Gilles Martin-Raget / BMW Oracle Racing, used with permission.
Posted by Unknown at 3:48 AM No comments:

Franck Cammas and the crew aboard Groupama 3 have started on their second attempt to take the Jules Verne trophy. They left Ushant at 3:50pm November 5th sailing in a strong North-Westerly breeze and lumpy seas.
Their website features lots of updates from the boat as well as the mandatory course tracker allowing us to follow their progress.
Posted by Unknown at 3:46 AM No comments:

Frank Cammas and a delivery crew of 5 (Thomas Coville among them) have positioned Groupama 3 in Brest to begin their wait for a suitable weather window before starting on their attempt to break the Jules Verne around-the-world record.

With the boat now in Brest, some final preparations are under way, including the removal of the engine and propellor-shaft as well as loading provisions (once the bilges have been cleaned).

The Jules Verne trophy is currently held by Bruno Peyron aboard Orange 2, with a time of 50 days 16 hours and 20 minutes, set in 2005. This is the second attempt at the Jules Verne trophy by Groupama 3 - she abandoned her last attempt after losing a float off New Zealand in February 2008. She became the first sailing boat to pass the 800 miles per day record with 857 miles in 24 hours on her recent North-Atlantic crossing. 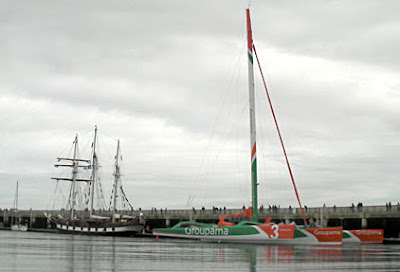